Musicians will tell you that the rhythms of the heart are at the heart of most songs. They will add, too, that the most powerful music is often tragic.

Those truths aren’t lost on members of the band Segue, whose musicians have included men from the class of 1989 who experienced their own tragedy in 2009 when their lead singer Michael Gable died, the victim of an enlarged heart, otherwise known as hypertrophic cardiomyopathy (HCM).

Because music also has the power to heal, members of the band transformed their loss into a the Gable Heart Beats Foundation in 2009 to raise money for the detection of heart disease, including HCM, a genetic disorder that affects more than 700,000 Americans and that ended the life of several SI grads over the decades, including Dennis Carter ’64, Owen Fitzgerald ’93 and Peter Antonini ’00. Later, Patrick Dunne ’14, who has HCM, led seminars at SI on the condition.

On Feb. 5, the surviving members of the band and their spouses —Amy Gervasi Mayo and Stefan Mayo ’89, Kathe Torok Barsi and Ralph Barsi ’89, Michelle Gable and Bill Taylor ’82 — came to SI to offer free screenings to prevent others from falling victim to HCM and other forms of heart disease.

A week before the screenings, they sat in the Student Activities Center to answer questions. The group also chose to do their work in the student center, just outside the athletics offices, “to make the process more comfortable for students,” Barsi added.

The screenings happened thanks to a partnership with Heartfelt Cardiac Projects of Laguna Beach and its trained volunteers. The two foundations together screened more than 150 SI students and faculty with free electrocardiogram (EKG) and echocardiogram (echo) tests.

Those screenings revealed results outside normal limits for five individuals, who were referred for further follow up with a cardiologist. In addition, 21 others had borderline results and were advised to follow up with their primary care doctors. These 26 individuals also received support from Heartfelt Cardiac Projects and will receive future support from Gable Heart Beats.

Also lending their support were SI students, who donated $800 to defray costs to what the foundation hopes will be a regular event at the school.

The foundation’s origins began with Gable, who was a gifted D1 soccer athlete at St. Mary’s College. There, he met Michelle Michelotti who also played D1 soccer, and a decade later, they married and had two children, Matteo and Grace.

Barsi met Gable at St. Mary’s College, where they lived in the same dorm. Gable regularly sang in the shower, which resonated throughout the halls of the dorm. “You could hear him singing a mile away,” Barsi recalled. “He had such a beautiful voice, especially with the echo of the shower.”

After hearing Gable sing at the on-campus pub, Barsi knew he wanted to play with him in a band one day. A year later, Barsi formed Segue with John Pasha ’89, Dan Burke ’89, Graham Burke ’89, Matt Dirkes and Martin Burke ’92. Later, Stefan Mayo ’89, a harmonica player, joined the band.

Graham eventually left, opening a vocalist spot for Gable. “The band loved him, “said Barsi. “We gave him the prime spot without hesitation. He also became an honorary Wildcat, as he was surrounded by SI guys and was part of our family.”

For more than 15 years, Gable performed with Segue in some of the most respected venues in the Bay Area, backed at times by all those mentioned above as well as Mark Fassler ’91, Thad Bedard, Brian Shindledecker and Rick Garcia.

Various combinations of these musicians played original songs in venues such as the Red Devil Lounge, Bimbo’s, Grant and Green, DNA Lounge, Sweetwater and the Concord Pavilion.

The men also worked at day jobs, including Gable, who, along with his wife, sold Internet advertising.

After returning home from a business trip to San Diego in 2009, Gable went to bed. “I woke up because of his loud breathing,” said Michelle. “I turned on the lights and saw that Michael was struggling.” She called 911 and attempted CPR. The paramedics, who found him unconscious when they arrived, got his heart going again, but he died at the hospital after going into cardiac arrest.

Two weeks after Michael’s funeral, their daughter, Grace, 11 months old at the time, began coughing. “I thought she just had a bad cough, but it persisted to the point where I took her to Oakland Children’s Hospital, where doctors told me she was in complete heart failure.”

She survived after spending a month in the ICU, where she was diagnosed with dilated cardiomyopathy, which is genetically related to her father’s HCM. “Now Grace is 7 and doing great,” said Michelle. “I even coach her in soccer. Ralph calls her ‘a beam of light.’”

A year after Gable’s death, the remaining band members — Barsi, Mayo, Fassler and Taylor — knew they needed to keep the band together and recruit a new lead singer. “Gable would have wanted us to continue playing,” said Mayo. They invited friend and musician Justin Achziger to join, and for the next six years, Segue went on to play in the Bay Area music scene. “The music will never stop,” said Barsi.

Because of Grace’s near-death experience and Michael’s death, the members of the band and their spouses also decided get to the heart of the matter.

“We wanted to raise awareness of the prevalence and dangers of cardiomyopathy and heart disease so that other families wouldn’t have to undergo what Michelle and her family went through,” said Amy, who works in private practice as a Marriage and Family Therapist. “We knew that Michael would not want any family to endure what his family had gone through.”

Segue then released a CD, One Race Human, in honor of Michael, and donated the proceeds to fund research, heart screenings and automated electronic defibrillators. Gable Heart Beats also partnered with Holly Morrell, a pioneer in the field, who also suffers from HCM and who began Heartfelt Cardiac Projects with the same mission as their own group — to save lives.

“She survived because of open heart surgery,” said Amy. “One third of people with HCM see improvements with surgery, another third improve with drug therapy, and the remaining third either die or get better on their own.”

Both foundations know that hope lies in early screening. EKG testing, however doesn’t always detect enlarged hearts. Echocardiograms, which use ultrasound technology, can detect HCM, but these tests can cost upwards of $1,500 in a hospital setting.

Gable Heart Beats Foundation raises money for these screenings through online donations and a wine auction held each February, which is American Heart Month. Thus far, the group has raised $15,000, allowing their partner, Heartfelt to screen in high schools, where they can bring the cost of both echo and EKG testing to as low as $85 per student thanks to volunteers. They focus on high school students because some heart defects don’t develop until after puberty and because every day three teenage athletes die of cardiac arrest in the U.S.

This outreach, including a social media campaign, has paid off. Gable Heart Beats has earned the support of celebrities, including Macklemore, Roberta Flack, singer-songwriter and X-Factor contestant Chris Rene, American Idol winner Lee DeWyze, American Idol finalist Andrew Garcia and Pete Moore of The Miracles — all musicians who appreciate the musical origins of the foundation.

Athletes have also lent their names to the effort, including NBA stars Bo Kimble and Ronny Turiaf as well as Stephen Curry’s father, Dell, who tweeted a post supporting Gable Heart Beats.

“They do this because they have heard of someone who has fallen victim to HCM, such as Hank Gathers, who died in 1990 while playing basketball for Loyola Marymount,” added Mayo.

Heartfelt Cardiac Projects is careful to screen students using both EKGs and echo testing. “Michael had an EKG that came back with normal results,” said Michelle. “If he had had an echocardiogram, he would still be alive today, as doctors would have caught his condition in time and treated him with medication to help shrink his heart.”

Ironically, it was the size of Michael’s loving heart that first drew Mayo to him. “Michael’s energy was bigger than life and always an inspiration for me,” he noted. “He was always a positive person who looked to help others. He inspired me to do the same.”

Taylor, an employee at Salesforce.com, was inspired to help too. “Salesforce is deeply rooted in philanthropy,” said Taylor, who focuses his efforts and those of his Salesforce team toward supporting the foundation.

You can help raise awareness by following Gable Heart Beats and Heartfelt Cardiac Projects on Instagram, Facebook and Twitter, where you will learn about upcoming screenings and heart health education.

View all posts by The Gable Heart Beats Team 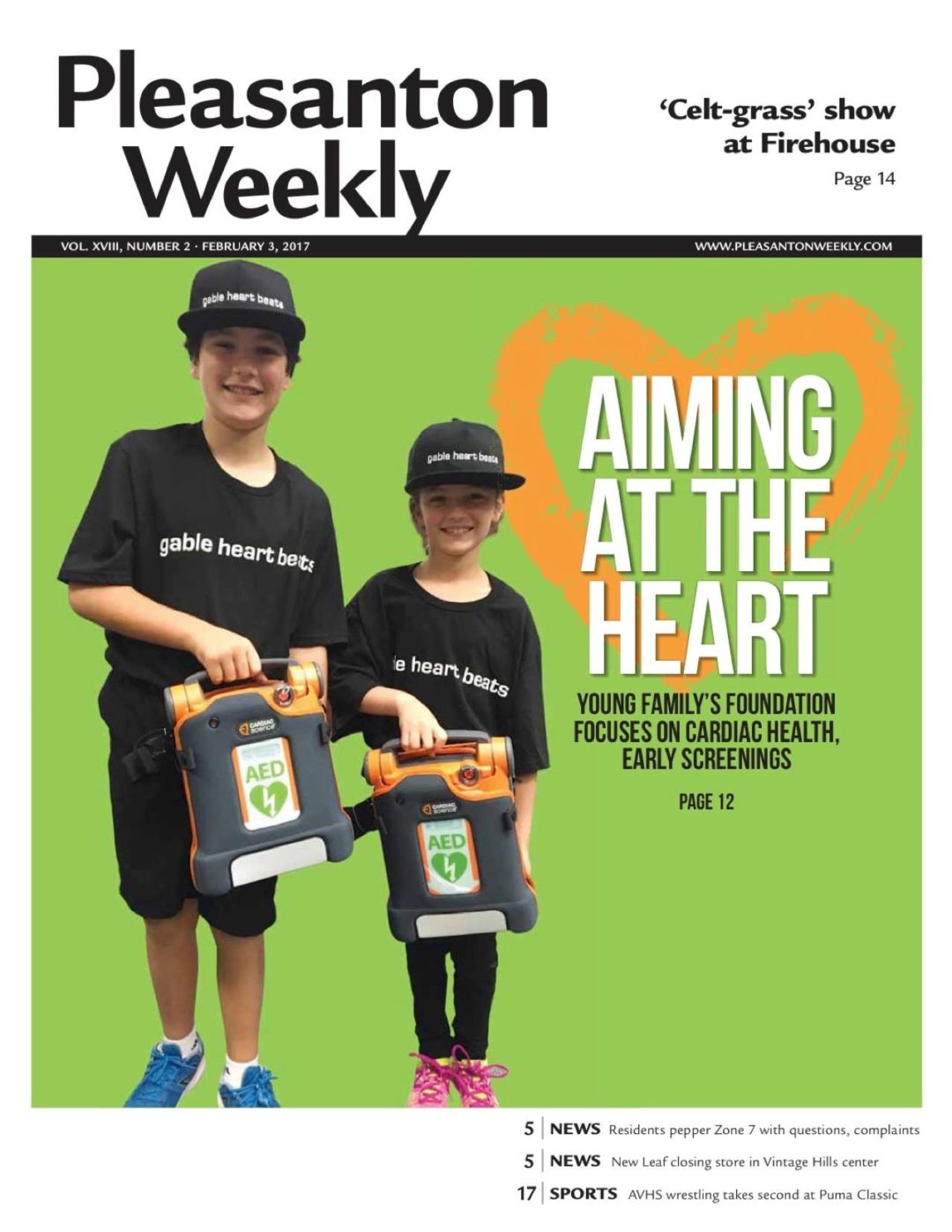